Welcome to our site! Gesher Galicia members log in here to see exclusive content, or if you're not a member, click here to learn about membership.

This section of the Gesher Galicia Map Room presents a number of historical street maps of major cities in Galicia and Bukovina created for a variety of purposes and by different official and commercial organizations. The collection includes maps labeled "general plan"; some of the maps were intended to support what is now called urban planning, as a geographical baseline for studies of and changes to local transportation and communication, housing, commercial building and trade, and tourism.

We view these maps more generally as "street maps", because they can provide an important bridge in family history studies between early cadastral maps and the modern era, specifically in locating where family residences and business were located during the "Austrian era" and the interwar period. Before World War I and in some cases even much later, vital and other records documented locations by house number, a unique number independent of street names in towns and villages as well as city districts. The transition to street addresses (with a number and the name of a street or square) occurred much earlier in cities than in smaller settlements, which makes these street maps valuable as a locator of family neighborhoods and sometimes specific buildings. As with cadastral maps, studying street maps can reveal interesting details about the expansion and evolution of cities over time, including when neighborhoods were built or extended, how suburbs were absorbed or when they acquired independent status, the introduction of light rail lines, the effects of fires and war damage, and more.

Broad interest in the cities of Galicia and Bukovina grew significantly in the 18th and 19th centuries in parallel with the growth of modern industry and strong urbanization; academic study of the characteristics and dynamics of cities followed quickly. The sampling of historical maps below provides an introduction, but a much larger collection of digitized historical maps of cities in Galicia and Bukovina spanning many more years is available in the Urban Media Archive of the Lviv Center for Urban History of East Central Europe; the Center's collection of digitized maps of Lviv (Lemberg, Lwów) numbers more than 60, dating from the early 17th century to the late 20th century. As is evident from the individual map descriptions here, a great many city street maps are available from the Polish Academy of Sciences and its digital library the Repozytorium Cyfrowe Instytutów Naukowych (RCIN). For links to these and other important resources for regional map research, see the Sources page in the Map Room.

The street maps and general plans in the Gesher Galicia Map Room are listed and linked below alphabetically by city, and then for each city the maps are listed chronologically. Some additional city street maps with unusual content are included in the Special Maps section of the Map Room.

For more information about how to interpret and use these maps for family history and other research, see the References section in the Map Room.

Kraków and Kazimierz General Map before 1813 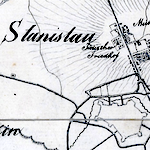 Gesher Galicia is a non-profit organization carrying out Jewish genealogical and historical research on Galicia, formerly a province of Austria-Hungary and today divided between southeastern Poland and western Ukraine. The research work includes the indexing of archival vital records and census books, Holocaust-period records, Josephine and Franciscan cadastral surveys, lists of Jewish taxpayers, and records of Galician medical students and doctors - all added to our searchable online database. In addition, we reproduce regional and cadastral maps for our online Map Room. We conduct educational research and publish a quarterly research journal, the Galitzianer. Gesher Galicia is also organized for the purpose of maintaining networking and online discussion groups and to promote and support Jewish heritage preservation work in the areas of the former Galicia.

You can search our free All Galicia Database, Map Room, and archival inventories, and read about member benefits starting at $50 per year. You can also join online.